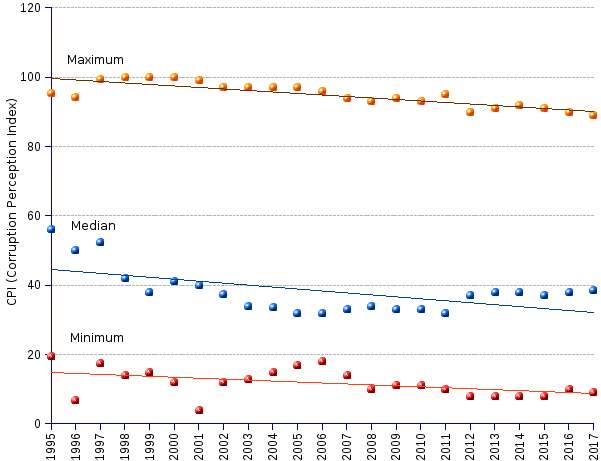 Yes, make no mistake, corruption keeps carrying on, as unflinching as a Swiss clockwork, bearing witness of the specious ingenuity of the white knights whose willingness to spout anti-corruption balderdash on us is commensurate only with their resolution to serve their personal interests first.

Indeed, the preposterous anti-corruption bravado of statesmen, high public officials, international civil servants, and, not to be overlooked, the righteous fellows of the non-governmental organizations dedicated to fight corruption, all their bombast has only driven perceived probity downwards worldwide, year after year. Since 1995, perceived corruption among public officials and politicians has gone down. The median score sank at the annual average rate of 1.7%, while the lowest score dropped at the annual rate of 3.43%. The best-in-class themselves, the virtuous New Zealand and the Scandinavian countries, fell 0.3% per year.

The big question is what purpose serve the alleged efforts by the States, the OECD, the World Bank, the Specialized Agencies of the United Nations, and the hyperactive ONGs to curb the corruption evil? If their jurists, legislators, law-enforcement bodies, regulatory committees, norm-setting panels and moral peddlers cannot achieve a higher performance, then anybody in the street could advise them that they got it all wrong, and they would better ponder a radical change of strategy. Provided of course that there is a drop of sincerity in their discourse.

Let us assume for a moment that they are neither downright mendacious, nor utterly dumb. They should be thankful that someone tells them about the two big flaws of their current approaches.

Number one, they address corruption as an individual flaw, a disease that affects individual persons as such, a malady that could be treated by the behaviorist method, the appropriate mix of reward and punishment, in an hygienic environment of efficient surveillance and control. Hence the array of legislative acts, administrative gateways, and convoluted procedures that the white knights set up to make life miserable for the corrupt. The outcome is contemptible. The public understands that they are out to kill an elephant with a fly gun. They may catch the small fry all right, but they do not come close to start clearing the ranks of the big game. Realistically, everybody says that corruption is getting worse every year.

No matter what the white knights believe, corruption is not an individual issue, but a social one. While alone in his island, Robinson Crusoe cannot commit any act of corruption. He needs other people from whom to take advantage by means of manipulation, deceit, misleading, tricking. There comes his companion Friday that Robinson rescues from the cannibals. This initial good deed opens the door. By promises of protection and by preaching the good Christian faith, Robinson has now a slave for free, a genuine man Friday. He can now rest from the hardships of extenuating work. The embryo of corruption is complete with its two components: an initial favor, and the subsequent payback. From then on, it is a matter of circumstances. Darwinism explains that the struggle for survival of the fittest will rule the behavior of our heroes. The greediness to seize the good opportunity, the urge to escape from the threat, the inherited or the acquired ability to adapt will map the trail ahead. Laws and administrative procedures are as useless to control the process, as they would be to impose any traffic regulations upon bacteria and white blood cells engaged in a race for survival. The white knights, raised in the neo-liberal, neo-darwinistic ideologies must know that. But like the drunkard searching his lost key in the dark, they do what they know how to, not what the situation demands. They probably think that it helps their own struggle for life — in the short run, it likely will.

The second failure is that, without exception that we are aware of, the arsenal of anti-corruption initiatives are directed towards managing, not extirpating the evil. In other words, they aim at unbalancing the cost-benefit ratio, by rendering the cost of corruption unacceptably high for its benefits, by increasing its risks, thus causing the optimization of the benefits of corruption more problematic. The white knights do not really strive to suppress corruption, only to bridle it to the point of making its social cost more affordable.

It is a waste. Corrupters will bounce back, devising new ways to counter the attacks, adapting to the new prevailing market circumstances. We are not dealing with a mechanic contraption, with a scale that can be set in equilibrium by carefully balancing the weights in its plates. Like all other social phenomena, it is an open system with feedback loops. Think of bacterial infections. Antibiotics are typically used to treat them with success. However in recent years, we have witnessed the spread of several strains of antibiotic-resistant bacteria. Infectious bacteria are no longer susceptible to previously effective antibiotics. Similarly, the corruption virus will strike back harder and trickier.

To cut it short, it is a hopeless fight, right? Not so fast! As long as the powers that be ignore corruption as a social phenomenon and as a living open system, as long as they regard people as behavioristic pigeons, deprived of conscience, commanded by pain and pleasure only, surely corruption will flourish. After all, as the classic Greek and Roman chroniclers report, it has been around since the beginnings of the European civilization, not to mention more remote epochs and places. However, as the same authors tell, there were also persons, not Skinner pigeons, with a conscience, and with an idea of a different world, where togetherness, fairness and independence would render corruption an obsolete and repugnant oddity. They still exist today and the fight goes on.