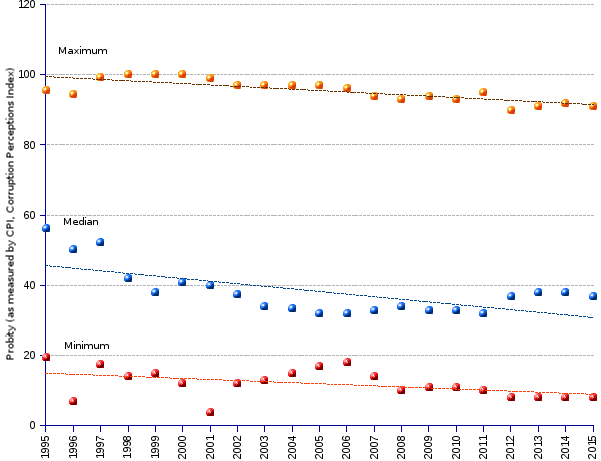 The world we currently live in, stricken with metastatic corruption, is an ailing body going from bad to worse, in spite of the noisily heralded intense care and aggressive recovery medicines expected to bring it back to a state of healthy probity. The illness became pandemic, striking the more corrupt nations (minimum CPI data points and trend line), as well as the less corrupt ones (maximum CPI data points dots and trend line), and the so-so ones (median CPI data points and trend line). To put it simply, corruption leaves nobody exempt, and nowhere probity seems capable of winning the contest. Year-on-year, the negative trend pursues its downward path and plunges into further depths. The regression coefficients worsened from -0.08 (median),-0.04 (maximum), and -0.03 (minimum) in 2014, to respectively -0.74, -0.4, and -0.3 in 2015, exposing the overall slump of the indexes from higher (less corruption) to lower (more corruption) values.

The ballyhooed war on corruption engaged by both national administrations and international organizations such as the World Bank or the United Nations could only fool the obstinate naive. It is a futile endeavor, lacking the necessary power to achieve its purported goal. Its impotence is the result of three analytical failures.

First, it rests upon an improper diagnosis, identifying corruption as a discrete list of individual misbehaviors, such as graft, embezzlement, influence peddling, or bribing, whereas it is rather an underlying problem-solving method that percolates throughout the entire society, from top to bottom, from right to left. Powerful people look at corruption as a convenient and fast shortcut to access the benefits they avidly covet. The commoners find there the only, if expensive, way of circumventing the obstacles raised by a rule of law that allows bureaucrats and profiteers to abuse the rights of the citizen.

Then, it focuses on the symptoms, the improper demeanors that may emerge at the end of the corruption chain, while ignoring the root cause thereof, the deepening inequality cleavage that transfers to the hands of the powerful the means to sway processes for their advantage, at the same time that the weak are left entirely alone, forsaken by the very jurisdictions that in theory exist for their protection.

Finally, it restricts its scope to the deployment of legislative and judicial instruments ingeniously designed to exclusively catch the careless offender, but utterly inconsequential to counter or prosecute any wrongdoer careful enough to conform to the letter, without regard to how gravely he may be injuring the spirit of the law.

The late 2016 debate among US academics and activists about what the term 'corruption' means is emblematic. The 2010 Citizens United v. Federal Election Commission ruling by the supreme court of the U.S. established that 'corruption' means a 'quid pro quo' trade, that is to say an equal exchange, a tit for tat of benefits, gifts, services or favors. Bribes, kickbacks, preferential treatment or influence peddling are clearly forms of quid pro quo, and fall therefore into the category of corruption. However, this is a highly stunted perspective. Quid pro quo is certainly corruption, but it is only one form of corruption. There are certainly others.

Even if a specific quid pro quo deal is not made, there is no denying that the weight of such bulky contributions by the wealthiest segment of the population is a bargaining chip in the hands of private interests to influence public policy. Such unbridled influence has a ubiquitous corrupting effect. The proliferation of corrupt behaviors such as the Clinton's and of corrupt non-governmental organizations such as the Clinton Foundation are congruous with the perceived disintegration of probity as indicated in the chart. This is tantamount to proclaiming the need to turn the fight against corruption inside out, and hit corruption hard at its root cause. Current approaches are nothing but delusive window dressing.