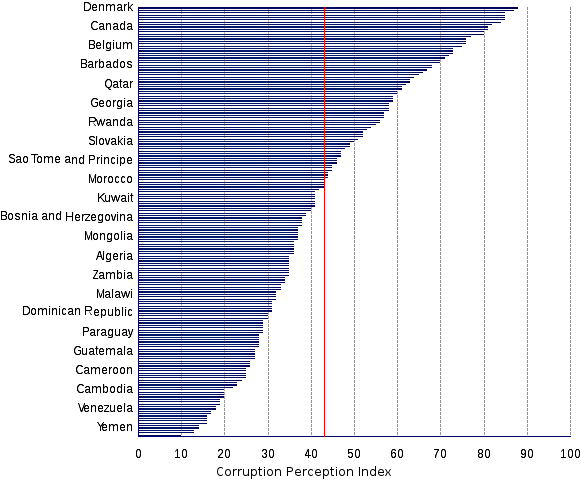 The publication by Transparency International (TI) of the Corruption Perceptions Index (CPI) for 2018 does not offer any big surprises – changes seldom happen while you are asleep. Corruption is alive and well, notwithstanding the perorations that cascade from those whose actual job is the right opposite of what they pretend it to be: to serve themselves, instead of being at the service of the administered. At the top of the integrity scale we find the traditional North European countries in the company of New Zealand and Singapore, in the following order: Denmark 88, New Zealand 87, Finland 85, Singapore 85, and Sweden 85.

At the opposite side of the spectrum, we have Somalia with the lowest score (highest corruption level) of 10, preceded by Syria and South Sudan 13, North Korea and Yemen 14. It is difficult to miss one common denominator for this group of countries. With the exception of North Korea, an outcast state under continuous threat that has eluded overt aggression so far, all others have been zeroed in on by the Western powers, led by the United States, the United Kingdom, France and the NATO for a sustained job of destruction and killing. Could foreign aggression, economic boycott and war be decisive agents of corruption that escaped the searching eyes of the World Bank, the United Nations, the OECD, Transparency International and the other dedicated corruption hunters?

The median score is 38 (Bosnia and Herzegovina, Indonesia, Sri Lanka, Swaziland) and the average, the red vertical line in the chart, is 43.12 (Morocco, South Africa, Suriname, Tunisia).