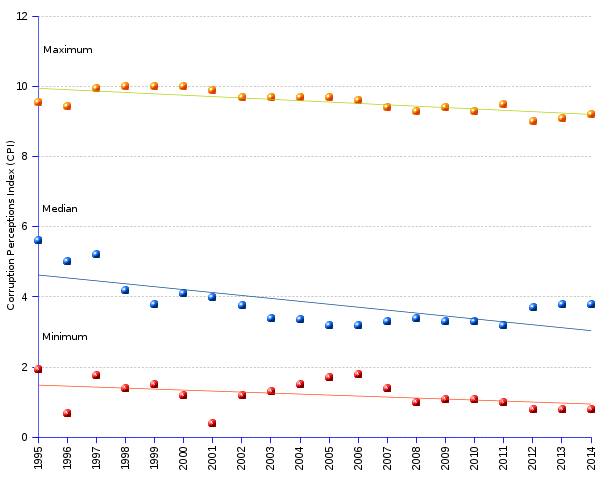 CPI (Corruption Perceptions Index) trends since 1995 expose the expansion of corruption practices amongst government workers and politicians across the board — provided that the CPI truthfully portrays the situation it purports to track. The chart follows the ups and downs of the three most telling parameters: the median that indicates the overall trend, the maximum that follows the evolution of the least corrupt nations, and the minimum that does likewise for the more corrupt nations.

Such a plunge does not square with the scenery broadcast by the media, packed with both heartfelt pledges of anti-corruption severity, and a swelling array of policies and legislation allegedly to track down if not eradicate the disease. A cynical mind could believe that the sole purpose of the anti-corruption buzz is to provide an alibi or a diversion to distract the observer's attention away from the endemic corrupt behaviors. It is probably true, but it does not fully explain the full phenomenon.

Why do some public figures, so vocal and caustic against corruption, seem so haplessly inept at walking the talk, let alone covering their misbehavior?

A couple of puzzling examples come from France. In 2013, the former government minister of budget Cahuzac, while lambasting tax evaders and pushing legislation to punish the culprits, was himself caught red-handed in a tax fraud scheme with possible illegal enrichment ramifications, and forced into a disgraceful resignation. Months later, the fast-track politician Thévenoud, former vice-president of the parliamentary committee on tax fraud, and a member of the inquiry committee on the Cahuzac affair, was charged with tax evasion and forced to resign from his trade minister job — a variety of other financial wrongdoings in his private affairs have also been reported. In both cases, the offenders were apt experts in matters of tax enforcement, conversant with all the legal traps that they themselves had helped design to catch the transgressors. They should know better than to indulge in breaking the law, carelessly forgetting to clear the tracks, leaving behind plenty of incriminating clues.

Another telling case is provided by recent revelations about the newly co-opted European Commission president Jean-Claude Juncker's past responsibility for providing scores of big multinational firms with effective, billion-worth tax shelters in Luxembourg, while he was the prime minister of the country. The fact that, as a co-opted European leader, he must henceforth prosecute the practices that he endorsed as an elected politician during decades does not seem to trouble him the least, nor for that matter the bosses who co-opted him for the new job, or the elected politicians who wander in the concourses of the European parliament and validated his appointment.

It would be simplistic to believe that these transgressors have been hit by a streak of schizophrenia; they are no Dr. Jekyll and Mr. Hyde. It is also unlikely that they naively assume that people take their self-advertised virtue at face value. Top tier politicians breed many enmities, and are perfectly aware that they face continuous and often unfriendly scrutiny by the public. Any unsavory secret, however deeply buried, stimulates the investigative instincts until it is brought to the light of day. The explanation is elsewhere. People motivated by saintliness, be it religious or political, are ready to sacrifice their earthly comfort, to the extent of martyrdom, for the blessedness of a holy spiritual life. Likewise, members of the elite, driven by the quest of worldly success measurable by their assets value, will ultimately accept shame and dishonor as the penance for their achievements, if they cannot help it — they obviously feel confident that their status will provide a sacrosanct shelter anyhow. Probity pledges by such persons must be evaluated accordingly.

This mindset is rooted in their dualistic psyche. For individuals of this variety, the world is a strict dichotomy. The "elite" on the one side, with one uttermost duty: to prevail, and entitled to extensive privileges, perquisites, exemptions and immunities. On the other side the "people", fickle, unknowing and without the necessary competence, to be led, disciplined, controlled, to be kept busy as the economy requires, and to be sedated with as much entertainment as the situation allows. The two forks of the dichotomy do not intersect or touch at any point; they are mutually exclusive. There is no way that the world of the elite can be contaminated by the attributes of the people, to the same degree that the latter cannot access the blessings of the elite. Asinine as it may be, this world vision is currently shared by a good many people. As if the world gave birth to a new strain of the old regime aristocratic ideology.

Why do people tolerate avowed corrupt leaders, to the extent of continuing to give them their ballot?

It is hard to understand how can anyone stand individuals that tell you lies, make promises they never keep, manipulate facts to con you, override your basic rights for self-benefit, only to come back knocking at your door to ask with uninhibited smiles that you trust and empower them once more, so that they keep doing more of the same for still another chunk of time. Amazingly, instead of a well-deserved flogging, they often get what they wanted in the first place. Such a self-abasement seems to justify the arrogant standing of the elite: people get what they deserve, and they do not deserve a lot, they are negligible dummies.

Comprehending the people's tolerance to the elite's corruption is the more challenging as corruption has huge costs that the former end up paying one way or the other: higher taxes, shrinking entitlements, more expensive or inexistent services, embezzlement, kickbacks. When daily needs are already so hard to fulfill, truly out of reach for larger layers of people, the latter should logically be adamant towards the corrupt. And yet that is not quite the case.

Reality is rough. People have plenty of things to deal with. Making a living on honest work is hard enough, it heavily exacts the person's strength, energy and available time. What is left of that, the sensible person prefers to use it to pursue one's own projects, rather than catering to the administration of the "common good". It seems expedient to pay somebody else to care of what you do not enjoy, or are not good at doing. The issue is that, once you empower others to deal with matters that concern you, and give them money to perform, you soon find out with dismay that they have used the power and the money not to purvey the best service, but to take advantage of their position. Too late to go back to square one, what seemed expedient became a merciless trap.

The game is unfair. Striving to wipe out corruption bears consequences. For the exhilarated elite, the burden of the consequences, however heavy, is but a small fraction of the huge benefits they rip off. For the weary people, however, the costs are most of the time unbearable, they are often a matter of life or death. For the common person, standing against corruption entails the risk of narrowing the doors to education, health, justice, of obliterating employment prospects, or even of losing liberty or life at the hands of resolute offenders. It is not surprising therefore that, while the elite let their crunch grow continuously following a smoothly ascending curve, people try to bear with and stay put, hoping for better times. As corruption seeps through the strata of the State and private organizations, they are themselves forced to play the game lest they are completely left out of jobs, social services and legal procedures. When they cannot stand it any longer, they burst out in rage; this is precisely what happened in Tunisia, when the suicide of a street greengrocer incapable of paying a bakshish to the police marked the start of the Arab Spring against hopelessly corrupt régimes in North Africa and the Near East.

Spreading corruption is a symptom of the widening chasm between two social strata. A global government system that condones more privileges for the elite, at most slaps it on the wrist for its greedy misconduct, and imposes more hardship on the people is bound to engage in a perpetual and ever harsher confrontation.

It is risky to tell which of the elite or the people will eventually win. For this time, it is at best a draw. However, the resilience of the so-called "square" and other popular movements is ominous for the elites.