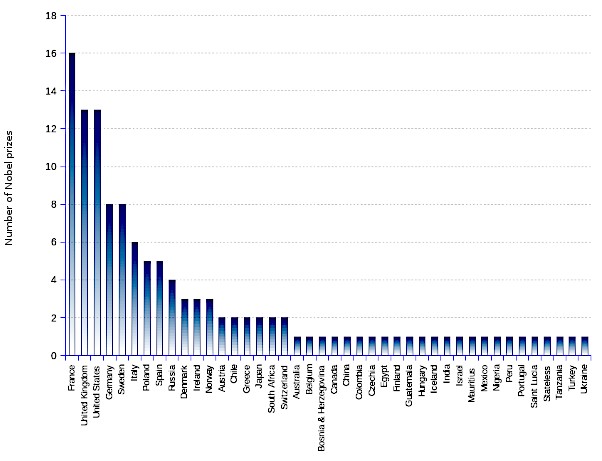 In 2018, the Nobel Committee decided not to award the Nobel Prize for literature. Whatever the stated - and the many rumored - reasons for such a radical step, the decision should be viewed as a sensible one, after the controversies that surrounded some awards in the recent past. Indeed, the Committee should stop and ponder the ways and means to restore their dented credibility, at least as the literature and the peace prizes are concerned.

Literature is the intellectual field where Nobel prizes are most widely shared by the world nations, large and small. Nationals of 41 states and one Stateless person have been honored. The category is the only one to acknowledge and recognize a stateless person. It is also one of the only three world most prestigious awards that have been spontaneously declined by the recipient. In 1964, Jean-Paul Sartre from France did not accept the Nobel for literature. In 1973, Le Duc Tho from Viet Nam refused the Nobel for peace. In 2006 Grigori Perelman from Russia declined the Fields medal for mathematics. There have been other instances of renunciation to Nobel awards, but apparently not voluntary. The 1958 literature Nobel laureate Boris Pasternak from the Soviet Union also declined the award, but allegedly he did not do so of his own free will. The Germans Kuhn in 1938 and Butenandt in 1939 were forced by the Nazi regime to decline their Nobel prizes for chemistry.

The Nobel for literature has been given to authors little known for their literary artistic talent. Winston Churchill, who prolifically wrote about his own career activities, better known as a hard-boiled conservative, imperialist, jingoistic British politician, who made himself quite a war hawk reputation in the South African Boer war, and eventually shone as the United Kingdom's leader against Nazi Germany during World War II, was awarded the prize in 1953. Henri Bergson, the French philosopher and 1927 laureate, is still a thinker to be reckoned with, but few would consider him a creative literary artist. Other instances, including the 2006, 2012, and 2015 awards have generated controversy, some critics insisting that the choice has been motivated on the grounds of international diplomacy and political bias, rather than by the sheer literary value of the recipients' works.

The 2016 prize given to Bob Dylan, a US pop singer, pushed things a bit farther. The Nobel people surely felt like giving the finger to the eggheads of the world that take literature too seriously. Why not — it is their privilege, they are also entitled to have a good time. But it makes things look messy. Songs, whether art songs (Lieder), love songs by troubadours and bards, or folk songs (work songs, lullabies, etc.) are normally classified under music, not literature. Surely, literature as we know it developed upon the scion of oral literature as sung by the ancient Greek aiodos and rhapsodos, and their native African, American and Asian colleagues. However, it is quite a stretch to include pop song lyrics among the likes of Gilgamesh, Iliad, Odyssey, Mahabharata and other classic epic poems. One suggestion: if you want to know more about Dylan's work and your first spontaneous thought is to buy the paperback edition of his text, then he is likely a literature artist. But if your first idea is to buy the disc or download his songs to your music device, then no, it is not literature that we are dealing with, and the Nobel committee have just made a practical joke at our expenses.

With the benefit of hindsight, the work of several prize winners seems rather trivial and bound to fade into oblivion. The acid test is to browse the list and ask yourself how many names you recognize, let alone how many made a lasting impression on you. On the other hand, influential artists such as Beckett, Joyce, Proust, Céline, Orwell, Pessoa, Borges, Musil, Ngugi, Yasar Kemal, or Abdel Rahman Munif, not to mention other literary creators less known in western circles because they worked in languages unfamiliar to most western readers in general, and to Nobel lobbyists in particular, were not deemed "deserving" enough to be honored. Such a combination of oversight, misjudgment, public opinion manipulation and sheer flattery, casts serious doubts on the motivations of the Nobel committee members.

[In the chart, former Soviet Union, Czechoslovakia and Yugoslavia appear under respectively Russia, Czech Republic and Bosnia and Herzegovina. Double nationals are counted twice, once for each nationality.]