You are here:   areppim >  Culture, Science and Technology >  Major Awards >  Nobel Prize for Literature Per Capita

Nobel Prize for Literature Per Capita 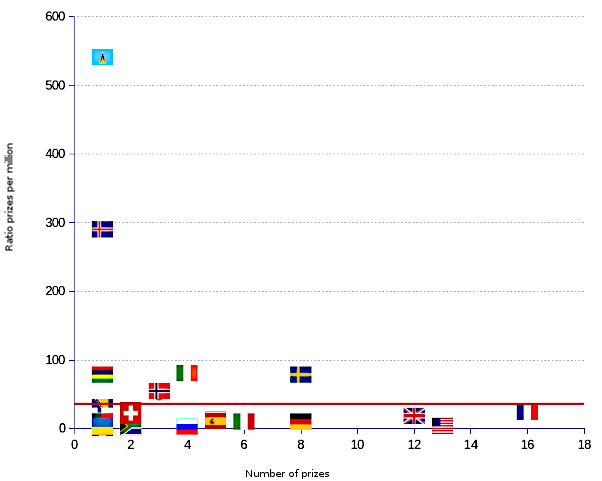 In 2018, the Nobel Committee decided not to award the Nobel Prize for literature. Whatever the stated - and the many rumored - reasons for such a radical step, the decision should be viewed as a sensible one, after the controversies that surrounded some awards in the recent past. Indeed, the Committee should stop and ponder the ways and means to restore their dented credibility, at least as the literature and the peace prizes are concerned.

With about 200 thousand nationals, the Caribbean island-state of Saint Lucia is far above all other nations in Nobel prizes for literature per capita, reaching an index of 533, or 55 times the median 9.8. In fact, Saint-Lucia could further claim the honor of being the nation with the most Nobel prizes per capita, all categories included, if only Arthur Lewis, Nobel prize for economics in 1979, had been given his native country citizenship, instead of becoming British for the sole reason that he was born under UK colonial rule. Literature, together with Peace, are the Nobel categories won by the vaster array of nations: 41 against Chemistry's 25, Medicine's 24, Physics' 18, and Economics' 13. Literature is also the only discipline in which a Stateless person received the distinction — it happened with Russian-born Ivan Bunin in 1933.