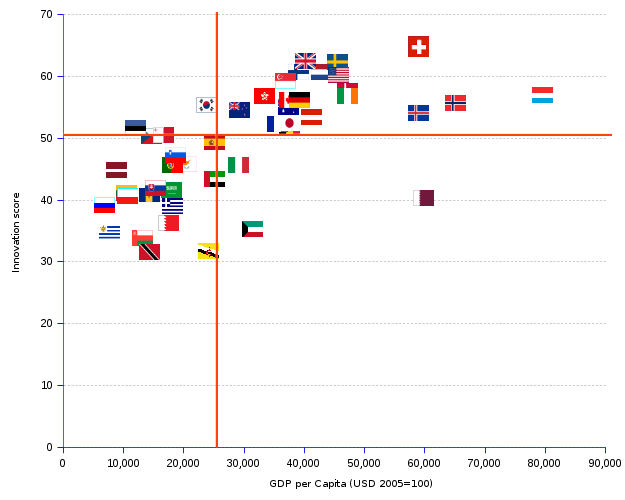 The top right quadrant includes countries that have both GDP per capita and innovation score above median. They are the high performers. This 21-strong group is mainly populated by small or very small countries such as Luxembourg, Iceland, Finland or Switzerland, most of which are not endowed with a plethora of natural resources. Six big countries manage to sneak in the group: Canada, France, Germany, Japan, United Kingdom, and the United States.

Even amongst high income and high innovative countries, the smaller ones seem to outperform the heavyweights. The likes of Czech Republic, Estonia, Malta, and South Korea are the top performers to be found in the low GDP per capita-high innovation top left quadrant, thus corroborating the idea that you do not have to be super rich to shine as innovation is concerned.

The laggards appear in the lower-right quadrant, and they include such oil-rich biggies as Kuwait, Qatar or the United Arab Emirates, Indeed, their innovation scores are disappointingly below the median. Living on a rent does not appear to be a strong enough stimulus to induce high performance. In the realm of innovation — being penniless is surely a hindrance; but owning lavish resources may not help a lot either.