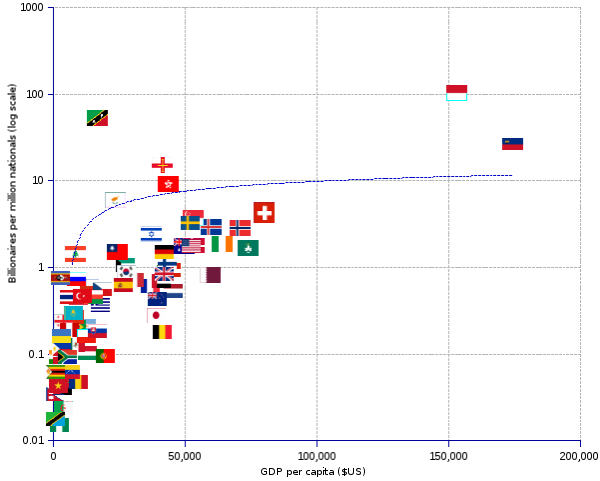 The scatter chart shows the billionaire headcount index (number of billionaires per million inhabitants: y-axis, logarithmic scale) as a function of the country's GDP (Gross Domestic Product) per capita (x-axis). The trend is indicated by the blue dotted curve. The r and the R² statistics reveal that there is no significant correlation between the number of billionaires per million population and the country's GDP per capita.

The chart provides a revealing snapshot of the weird billionaire disorder. In the same way that one expects high mountain peaks to rise amidst high mountain ranges, it would be reasonable to expect high billionaire headcount indexes in high GDP per capita countries. Wrong, it is not necessarily so.

Above the (logarithmic) trend curve, appear the lilliputian countries whose prosperity rests significantly on luring super-rich foreigners who earn their income elsewhere with easy-going tax schemes. Wealthy people swarm Liechtenstein and Monaco. It is normal, theses countries boast GDP per capita worth five or six times the average of the countries listed in the table. The reasoning is still valid for Guernsey and Hong Kong, whose GDP per capita rises above the average and exceeds twice the median. But what should one think of Cyprus, and St. Kitts and Nevis, whose GDP per capita fails to reach the average?

Towards the center of the chart and close to the curve, one finds the group of prosperous economies such as Switzerland, the Scandinavian, Germany, the Netherlands, United States, Australia, etc. with a high GDP per capita, typically above twice the median, and a sizable number of billionaires. It makes sense.

However, the lower left area is crowded with low GDP per capita countries, of which some concede a large percentage of people living below the US$1.9 per day poverty line. Angola, India, Nigeria,South Africa, Tanzania, and Zimbabwe confess two-digit percentages of people struggling in dire poverty while at the same time feeding billionaire fortunes. China and Vietnam may be the very paradigm of the billionaire non-sense. Still ruled by so-called communist regimes, whose avowed goals are to build an egalitarian, class-less society, of which profit-makers will be excluded, and where the workers will command, these countries, with a GDP per capita that is a small fraction of the average, register a swelling billionaire phenomenon, both in numbers and in net worth, year after year. 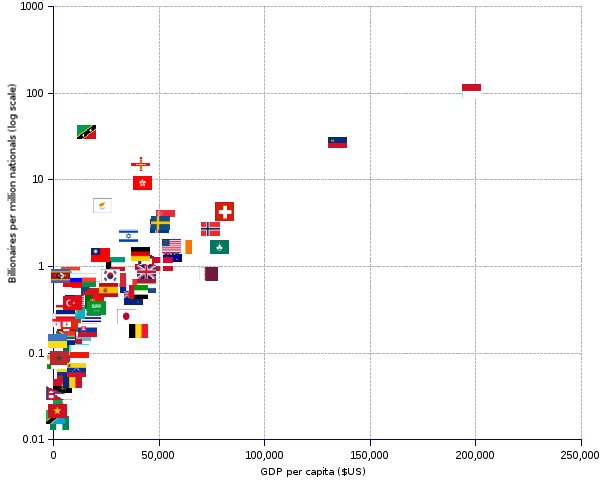 The scatter chart shows the number of billionaires per million inhabitants (y-axis, logarithmic scale) as a function of the country's GDP per capita (x-axis). The lower left area is crowded by countries with low GDP per capita that generally have not so many billionaires, e.g. Vietnam, Tanzania or Nepal. The central area of the chart is filled with rich countries such as the United Kingdom, France, Germany, Switzerland that have a sizable list of billionaires and a considerably high GDP per capita. At the top right one finds the outliers, consisting of the exceptional cases of extremely small countries like Monaco or Liechtenstein that have quite a number of billionaires, since they specialized in attracting super-rich people by offering them effective tax shelters. 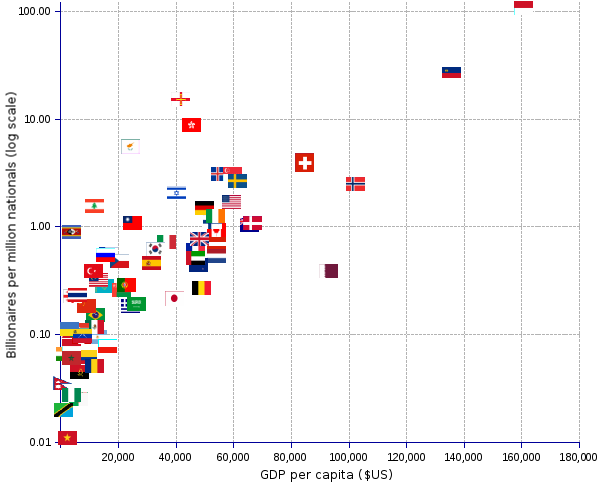 Year after year the world displays further instances of the same degrading show of lavish riches rubbing shoulders with extreme poverty. In 2016, we can find a number of low GDP (gross domestic product) per capita countries such as Vietnam, Tanzania, Swaziland, Algeria, or Colombia boasting their own billionaires. That may be offensive enough, but what comes across as downright outrageous is the coexistence in some countries of individual billionaires and a swarm of people trudging in utmost poverty.

Consider the sample of countries in the table below. They all maintain a collection of billionaires — and quite a shining one in the cases of India, Indonesia, China and Brazil.

Those billionaires possess vast wealth, weighing from 4% to 11% of the country's GDP. Occasionally, the tabloid press reports on the glittering social parties given by some of their illustrious members. But it is nowhere reported that they might experience difficulties to sleep peacefully, or that they might suffer from painful stomach ulcers caused by an uneasy conscience. The knowledge that crowds of their country fellows ramble around, desperately trying to survive another day, neither brings them insomnia, nor impairs their digestion.

You may argue that billionaires cannot see the wretched crowds from their palaces' terraces. That does not go. There is no way to conceal the hundreds of millions of human beings living on less, sometimes a lot less (see poverty gap above) than $1.90 per day. There is no way to hide away 53% of the population in Nigeria or 21% in India. They exist, they are everywhere, one cannot avoid bumping into them. It seems rather that this bipolar distribution of wealth is viewed as a law of nature by all concerned, a law of nature that is taken as a blessing by the happy few, and is perceived as an utter misfortune by the innumerable destitute people.

The chart shows the scatter of billionaires per million inhabitants (y-axis, logarithmic scale) as a function of the country's GDP per capita (x-axis). The lower left area is crowded by countries with low GDP per capita that generally have not so many billionaires, e.g. Vietnam, Tanzania or Nepal. The central area of the chart is filled with rich countries such as the United Kingdom, France, Germany, that have a sizable list of billionaires. At the top right one finds the exceptional cases of extremely small countries like Monaco or Liechtenstein that specialized as tax shelters for super-rich people.

It is easy to visually grasp the meaning of the scatter distribution. Common sense should lead us to expect that billionaires prosper in high-income countries, those that assemble in the center of the chart. They actually do, and there is no surprise here. The disturbing fact is conveyed by the densely populated lower left corner of the chart. It is disturbing because it exposes the fact that billionaires can thrive also in poor or even very poor countries. Putting it differently, billionaires may flourish in all environments, in rich ones of course, but also in indigent ones. Indeed, this is corroborated by the statistics. There is only a weak linear correlation between the number of billionaires per million and GDP per capita (r = 0.61). The variation of GDP per capita can explain only 38% of the variation of the ratio of billionaires per million (R² = 0.38).

The 21st century is a liberal provider of novelties in the economic and social fields. Since the middle of the 19th century, when Marx and Engels published their Communist Manifesto, a relentless struggle of socialism against capitalism was engaged for roughly 150 years with uncertain results. Come the years 2000, and the whole scenery becomes blurred. Capitalism puts on its fancy, gleaming neoliberal garments, and throws its old Christian, benevolent, paternalistic clothes away for good. As for socialism, one would be hard pressed to reconcile the venerable socialist ideals of brotherhood, equality, solidarity and fairness to their contemporary implementation by self-named "communist" societies.

Two countries epitomize this transformation process. The United States remain the archetype capitalistic billionaire nation: high GDP per capita ($ 59,503), and a record 540 billionaires (an index of 1.67 billionaires per million people). The flip side of such a glamorous tableau is a widening gap between rich and poor, the growing masses of degraded poor abandoned to themselves, cut off from federal food, health, and shelter subsidies, the dire prospects for those living on uncertain labor-wages, and the free fall of middle classes to poverty levels.

The "socialist" counterpart is China, an alleged communist society, ruled by a strong communist party, and not a bit self-conscious of its revolutionary legends. There is no need to detail the heavy economic role that China plays in the contemporary world. The meaningful point is that China, second only to the United States, is the country with most billionaires, a total of 251 weighing 5% of the country's GDP. There is, however, a sharply contrasting side to this prodigal wealth. A total of 155 million people, or 11.2% of the entire population, live in extreme poverty, surviving on less than $ 1.90/day. Normal people would feel uncomfortable to bring into agreement such a sickening state of affairs with the motto "From each according to his ability, to each according to his needs" that allegedly encapsulates the communist goals. Normal people should, but people in the central committee of China's communist party do not.

By the end of the 20th century it was fashionable to earnestly declare the "end of history", asserting that the spread of free market capitalism and of its lifestyle signaled the ultimate form of social organization. The initial decade and a half of the 21st century quickly exposed the construct as a trifle. We have undisputed evidence that, far from reaching its end, history is taking a turn that opens into a wide array of possible forms of human government, some of which do not look very palatable. Just to mention a few examples: the emergence of asymmetric wars successfully challenging the military might of the big world powers; the worldwide spread of small group or individual terrorism that governments find impossible to curb; the departure from such basic rights as the right to due process of law, to freedom of movement, to freedom of expression or to privacy, all sacrificed on the altar of the security of the state; the deepening estrangement between the people and the officeholders; the long-lasting financial and economic crisis that is ruining the social fabric, while exposing the fallacy of the free-market ideology; or the uppermost threat posed by the rapid man-made wreckage of planet earth.

Against such an agitated background it is sensible to prognosticate that sooner or later people will rise to their feet and demand urgent and primary changes. Since it chiefly affects the everyday life of billions of people, the dichotomy between super-rich and deep-poor is bound to become a source of exasperation, and to effect structural and policy volte-faces liable to turn the social status upside down..