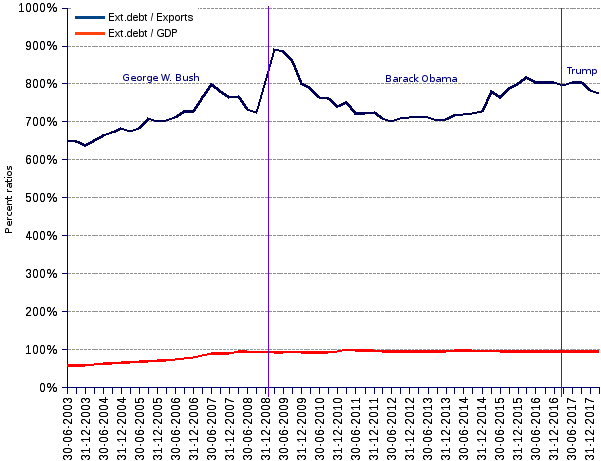 United States external debt is 96% of GDP, and almost eight fold the value of annual exports. Considering that the US dollar is the most used payment currency in international transactions, the United States can easily finance most of their external debt by dumping US dollars on creditors. To put it simply, US trade partners need dollars to pay for their own imports. Therefore, they are willing to let the United States have their goods and services in exchange for dollar bills. As long as creditors continue to use dollars for their own payments, they will be willing to build dollar denominated currency reserves.

The only major threats for the U.S. are two. First, the emergence of an international payment currency capable of competing with the US dollar and playing its role in the global economy. It has not been the case so far, and, despite several motions in this direction, it will not probably be in the foreseeable future. Second, the deluge of dollar bills may cause US-dollar holders to develop concerns about the declining value of their holdings. However strong, the whole US economy is insufficient collateral for the more than 5 trillion dollar-denominated foreign-exchange reserves. Creditors may feel tempted to rid themselves of their dollar positions. But they are well aware that they cannot rush without facing the risk of a sudden collapse of the dollar value, which would hit them back with a vengeance. The risk is therefore not imminent — the United States still have plenty of time to indulge in big foreign indebtedness before having to figure out how to straighten their ledger.