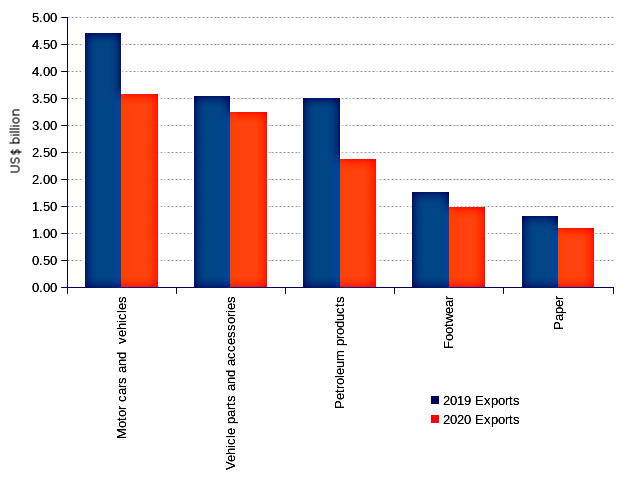 The Covid19 pandemic toppled Portugal’s international trade down. The United Nations Comtrade reports that the 2019 five most important merchandise export categories, namely motor cars and vehicles, vehicle parts and accessories, petroleum products, footwear and paper in descending order, representing roughly 10 percent of GDP, suffered heavy falls in value after the pandemic has been declared. Total 2020 exports in the five categories declined by -20 percent. Total exports of cars and of accessories dropped by more than -17 percent, petroleum products by -32 percent and footwear by -15 percent. The monthly breakdown of exports in Euro currency provided by the Portuguese INE (Instituto Nacional de Estatísticas), with a merchandise classification different from the UN Comtrade one, confirms the fall of exports in March 2020 (-13 percent), followed by the debacle in April (-41 percent) and in May (-39 percent) to end the year at -10 percent.

The country’s trade profile shows an almost one-to-one relationship between the top export and the top import categories. Exception made of footwear, which is largely a genuine Portuguese designed and built product, Portugal is just a link of the international manufacturing merry-go-round. The country imports oil, puts it through its highly pollutant oil refineries and exports petroleum products. It imports engines, gearboxes, chassis, automobile electronic systems, etc., assembles them in the large auto makers-owned assembly lines installed in the country, then exports cars, parts and accessories. The same with railway material. It produces pulp in the polluting mills that the big international paper makers once preferred to relocate to more complacent places, then it exports plain paper products.

Exports and imports to Portugal’s GDP weigh heavily on the country’s GDP. A weakening foreign demand immediately blows a chill across the Portuguese economy. The BoP overview shows that, as the world grew more nervous about the potential consequences of the coronavirus spread, and industrial and private consumers put the brakes on purchasing, exports had an immediate setback (-4.99 percent, Q1 2020), followed by the decline of imports (-1.91 percent). Against the backdrop of the Covid19, it would not be sensible to continue buying parts for the idling assembly lines, or to purchase more crude oil to refine into kerosene, diesel or benzine for grounded aircrafts or for cars standing still in the parking lots. As the general slowdown caused by the pandemic went on, 2020 imports fell rapidly (-20.25 percent) thus underscoring the breadth of the economy recession. The combined contraction of exports and imports, together with the general slowdown of the other economy aggregates caused a contraction of the GDP by -5.25 percent.

By and large, Portugal's remains an ancillary economy, subordinated to the wealthier countries, doing the menial or the dirty jobs, performing the low value-added tasks. Assembling cars and vehicles is well below the designing and building of engines, gearboxes, or automotive electronic systems, both in terms of ingenuity and uniqueness. Making beds, cleaning rooms or serving at tables for tourists, in other words housekeeping, be it for residents or for tourists, is quite a useful deed, but surely not the pinnacle of one’s economic accomplishments. Oil refineries and pulp mills may provide much needed immediate returns, but they incur hidden and deferred costs, such as the health hazards and environmental damages caused by their polluting operations, costs that the wealthier countries deem exorbitant and endeavor to get rid thereof. The bottom line is that an ancillary economy is a low rewarding, precarious, vulnerable and ultimately a costly one. It may be a necessary development stage before ascending to a balanced, viable and congruous economy, but not a state to be content with. The shame is that both Portuguese politicians and entrepreneurs feel cozy with it, and do not strive to try and open new paths leading to a more consistent economy. But then Portuguese built themselves a century-old reputation as providers of a variety of small, often fishy, services, as handymen or agents for foreign organizations in the African and Chinese trading posts — causing the Portuguese word comprador to find its way into the English and the economics vocabularies.